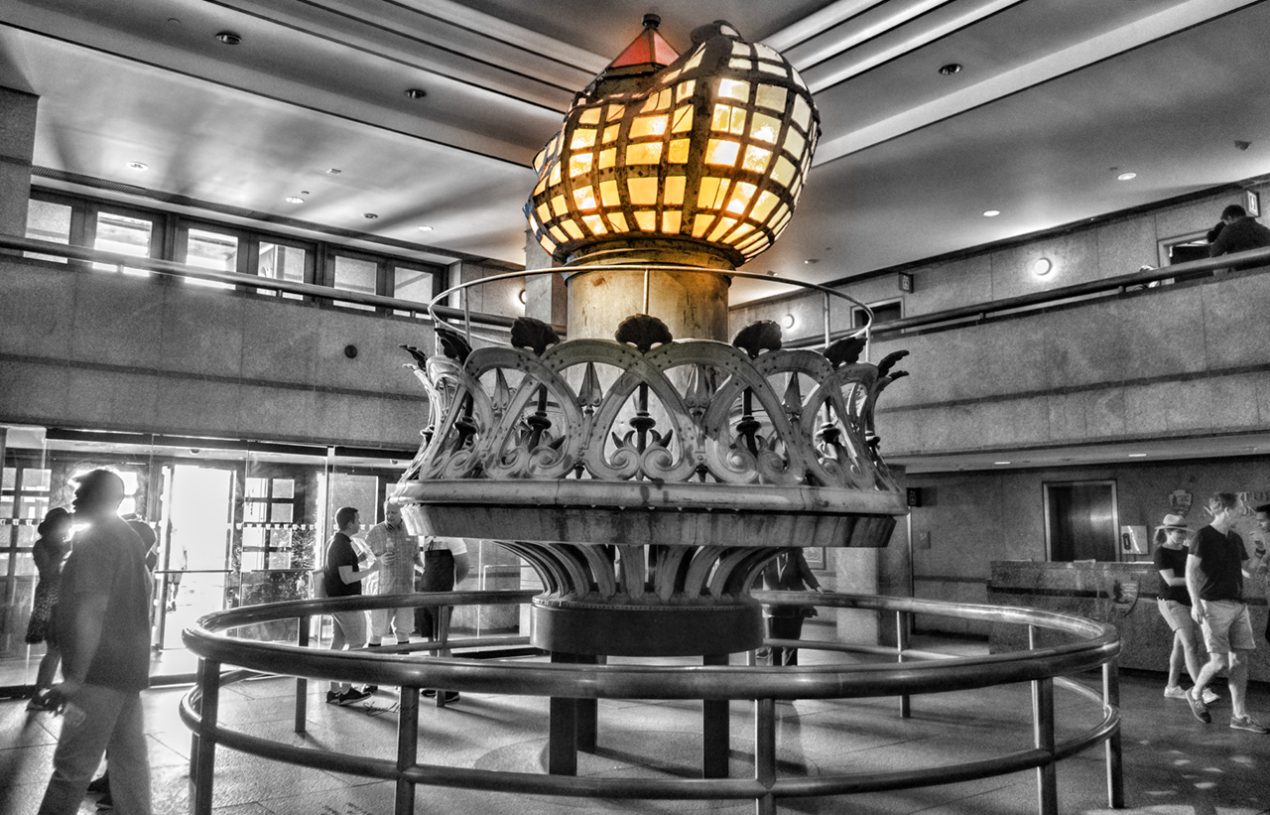 See Rhode Island or Bust and New York City Day 1 for the beginning of the trip.

I got online and bought a ticket to the Statue of Liberty / Ellis Island tour for early Monday morning. I had read that mornings were the best time to go. I checked the subway map to plan my route. So, on Day 2 in New York City, I headed out bright and early, looking for breakfast.

Bumps in the Road

Did I mention that it was Labor Day? Holidays change everything. The streets were virtually empty and everything was closed. So, breakfast was a coffee and muffin from the only small market open.

The front of Penn Station, empty and quiet.

At Penn Station, I discovered that there was construction on the line I needed to take to Battery Park. Battery Park is where Statue Cruises is located. So, the line that goes straight there, was closed. So, some helpful metro workers told me to take Line 2 to a different stop and get on the free shuttle that would go to Battery Park. At the stop, there was no shuttle and the sign said it would not arrive for another 30 minutes.  According to my phone, I could walk there in 20. So, off I went. I took lots of photos on the way. Here are a few. It took me a little longer than 20 minutes. There was construction, thus closing the sidewalk and I had to take a detour.

The Chrysler Building peeking out between a building in NYC

On the boat over, I had a great view. But once we started getting close, people started crowding in front of me. I managed to snag a few shots before too many people came in.

Statue of Liberty from the boat

I visited the Statue of Liberty first. I walked up 195 to the pedestal because the elevator was packed and full elevators are on my list of “probably not”. I made it up to the pedestal and got a great view of the city and the grounds below. If you go, you will have to get a locker. Be prepared for frustration and waiting in line for this. Either way, I’m glad I went. It was worth every step.

The view from the Pedestal ©Sharon Popek

The statue from the Pedestal ©Sharon Popek

The signs say “Area of Refuge” by Sharon Popek

I and 50,000 other people decided it was time to get back on the boat and go to Ellis Island. By the time I made it off the boat and out of the crowd, I was pretty tired. But I walked around the place and took some photos.

A copy of the book of names

After disembarking at Battery Park, I found a kiosk selling cold beer and could not refuse.  I bought a beer and walked around for a bit. Then I returned to the room for a long nap.

A monument to refugees in Battery Park

After my nap, I found an Indian place for dinner. It was delicious. The garlic naan was spot on.

A good night for pizza in black and white

After walking 11 miles and taking tons of photos, it was time to retire. The next day would be more walking, sweating, drinking, and photos.

I went to NYC and did a thing