All Aboard the Crescent 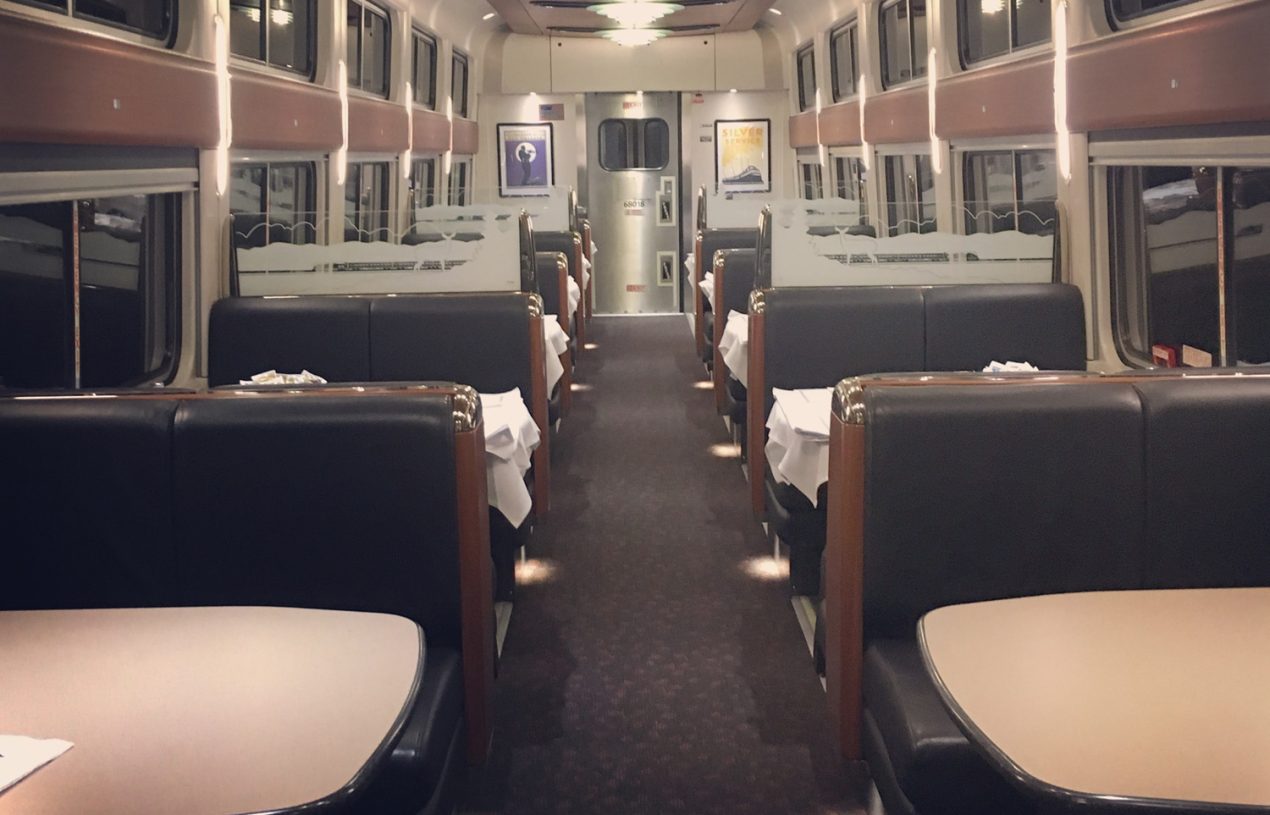 In September 2018, I visited NYC. Read about that visit here. While there, I took tons of photos. Two of those images were accepted into a juried exhibition called “Glimpses of Our World”. Naturally, my husband and I decided we needed to go NYC for the artist’s reception. My husband doesn’t fly and driving seemed like a stressful nightmare. So, we decided to take the train. Specifically, the Amtrak Crescent, which runs from New Orleans to New York City.

Knoxville does not have a station, so we had to drive to Charlotte, NC to get on the train. Did I mention the train was leaving at 1:45am? It took just over 4 hours to drive to Charlotte. Did I mention this was something we just really wanted to do? When we got to the station, I was a bit surprised by the size of it. I had seen photos of the exterior. Since the Charlotte Station is the fifth busiest station in the Southern US, I expected it to be a bit bigger on the inside. It was not. The building was originally built in 1962 by Southern Railway. It has not changed since then. Although, I have read that Charlotte is planning a larger transit station to be finished in 2024.

Once on the train, our porter, Vincent, helped us find our roomette. A wee space, great for 1 person, acceptable for 2. The seats fold down to make a cot. And an upper bunk slides down. When you get a sleeper, you also get a porter. Vincent was a excellent! He made sure we got breakfast and lunch and did not miss our stop. He switched our roomette from the night layout to the day layout (2 seats). We talked to Vincent about his hometown of New Orleans, another place now on our list of places to visit! We slept well, once we got used to the movement of the train. People in roomettes get breakfast and lunch on the day train. Both meals were fair. Better than an airplane meal, which is a rarity anyway these days. Lunch is a prepared menu, so don’t get too excited about a gourmet train lunch.

A great way to travel

The great part about train travel is that you get to see a little more of the US than if you drove. Of course, we were moving pretty fast so unless there was a stop, it was difficult to take any photos. But it inspired us to drive the route and see some of those beautiful towns and cities some day. Another thing I like, is that when you go to the dining car, they will seat with you someone you don’t know if there is space at their table. This is a great way to meet some interesting people and learn about new places to see! If you do not want to do this, they are accommodating and will allow you to sit alone, if there is room. For breakfast, I sat with a young man from Canada. He was not very interested in chatting, and that was fine.

A little issue with the roomette though. There is an actual toilet in the roomette. This is just awkward and weird for me. Fortunately, there was no smell, which was my biggest concern. Other restrooms were available 3 cars up in Coach. So, I admit, that I did break down and use the in room facilities. It was not the worst thing ever. That being said, Amtrak, please remove these and just put a facility in each passenger car. I know that is the way it is in the newer trains. But maybe the Crescent could use a quick retrofit?

We loved ride the train. I like being able to walk around and stretch my legs. It did take a little longer than what would have been a 3 hour flight. The ride was 12 hours. However, we did not have to arrive 2 hours early, go through security, remove all of my toiletries, or face a good possibility of delay. The PIA factor in flying that makes the long train ride worth it for me. I get so stressed out when I fly. How long will security take, will the alarm go off and I have to get wanded and patted or worse, taken to the side? Will I leave something in the plastic bin? Do my socks have holes in them? We also did not have to find a way from the airport to the hotel. The hotel was 2 blocks from Penn station, so walking was quick and easy.

Stay tuned for the next entry about NYC and the show!

5 thoughts on “All Aboard the Crescent”