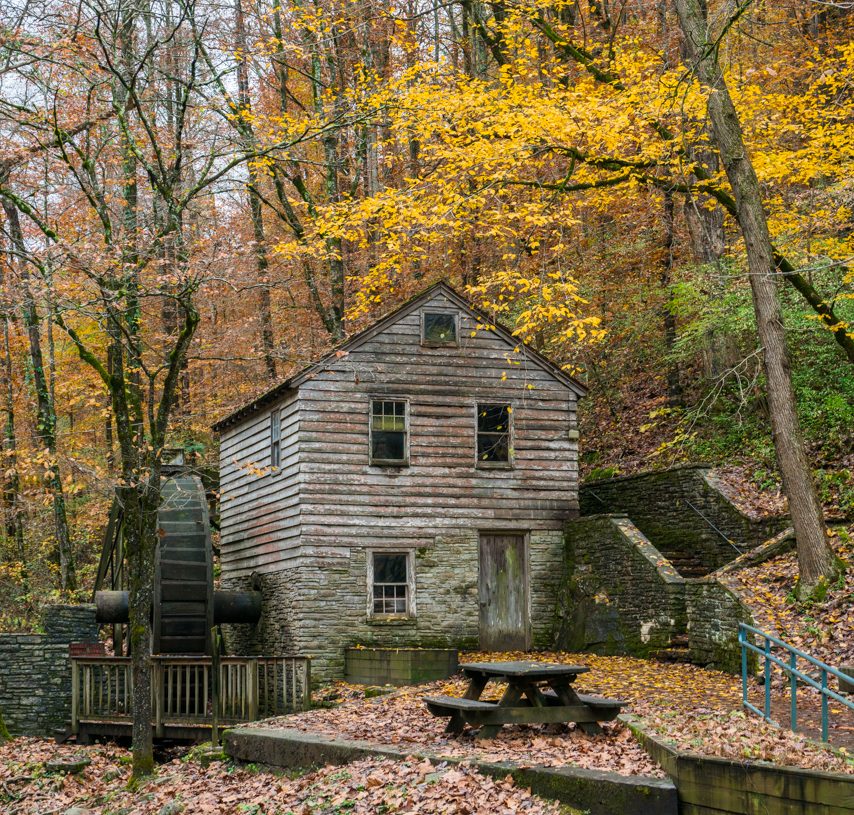 We changed plans several times for this Tuesday Trek due to weather concerns. We were originally going to go to Norris, then on up to Rugby. After checking the weather and the rain possibilities were looking good, we decided to just go to Norris, since nothing in Rugby would be open anyway. Apparently Tuesday is an off day for everybody! This morning we got up and it was a pretty steady rain, so we decided would stay in Knoxville and maybe go downtown for lunch and an afternoon movie. We’ll have a leisurely coffee and hang until about 11am then head downtown for lunch. Uh, yeah, the coffee pot is broken. So, my packrat husband found his grandma’s old percolator and we made coffee with that. It was fine coffee, if not a little messy.

Our coffee pot this morning.

After a bit, the rain stopped. So, we debated whether we should try for Norris or stick with the movie plan. We decided to go to Norris, skip Rugby, and go to a movie when we get back into town. On the way to Norris, we stopped at a place called Rural King so the husband could buy some oil for his car, he likes to change his own oil. We were taken with the place, but didn’t buy much. I did have to drag my husband out. We finally made it to Norris. I found a little cafe in town that was supposed to be great, we went straight for it. They had some interesting appetizers, trout cakes with butter cabbage (?) and a pecan cheeseball, on the menu that we wanted to try. But guess what? They were out of both. No worries, we ordered some sandwiches. I ordered a Philly Cheesesteak and Walt ordered the grilled cheese with bacon and pickles (blech). The philly was fine. He liked the grilled cheese okay, too. We haven’t hit any home runs in the food department of Tuesday Trekkin’. But I think Tuesday seems to be an off day for most places. We will keep trying.

We should have tried the pizza

Sweet Cafe in Norris next to the Post Office and a general market.

Lots of bread. The bread was great, though!

After lunch, we walked around the small town square for a few minutes. We found a museum connected to the library. So, it’s only open on Tuesday and Thursday, but it doesn’t open until 2pm. It was 1pm. We had to laugh about it. We left town to go to see Norris Dam. On the way, we spotted the Norris Musuem and around the corner an old Grist Mill and Barn with a thrasher, both moved piece by piece from other locations. The museum was closed, of course, the mill and barn were locked but we were able to walk around and get some great pics!

It was closed for the season. But we were able to look around.

He stood very still, showing very little fear of us.

A piece of the largest Trigonia Elm found in the US. It was cut down by TVA in 1980 after it was fatally damaged by lightening.

They even provide power cords!

One of our favorite local pizzeria in downtown Knoxville

We finally made it to the dam where we met a nice man showing off East Tennessee to his visiting family. I had to take some pics of the visitor center with it’s midmod architecture. We made it back in town in time for Walt to take a quick nap before heading out to the movie, Thor 3: Ragnarok. The movie was great! It was patently ridiculous and silly, but I loved it. Afterward, we picked up pizza from our favorite pizza joint, Dazzo’s Pizzeria. It was perfect!

Stone steps at the Rice Grist Mill in Norris Dam State Park. The autumn leaves have fallen and the recent rain gave them the feel of an orange water fall.

Threshing Shed at Norris Dam State Park with a blue wagon waiting to be put to work.

The colorful autumn leaves are reflected in Norris Lake on the quiet, still water.

A heron sits still and quiet by the stream in Norris Dam State Park in the fall.

Life in Blue: A Gallery of Blue Art