A Weekend in the Bluegrass 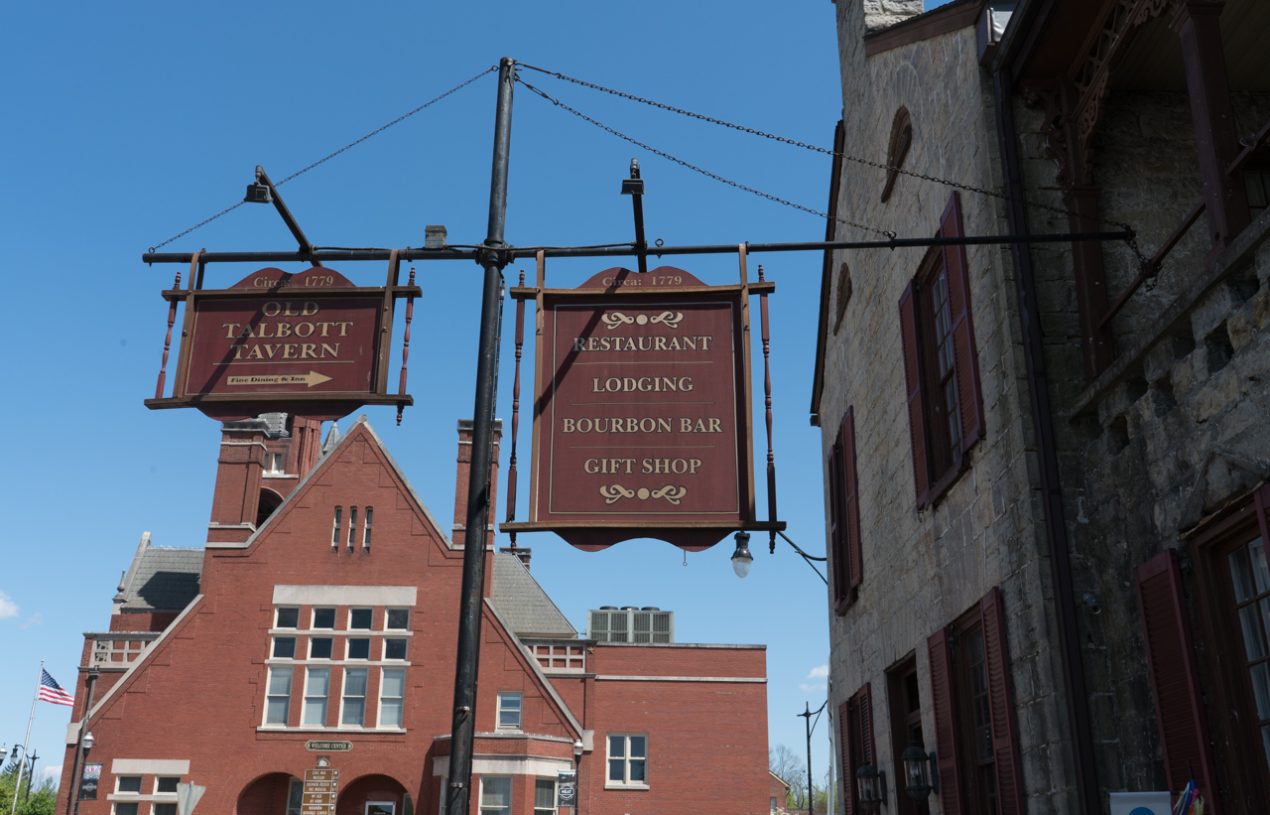 My father recently gifted my sister and I a farm in Springfield, KY. So, the mister and I decided to go up and spend the weekend checking out the area and surrounding towns.

We started out early on Friday and headed north to Kentucky. We stopped in Stanford at the Bluebird Cafe where we ate a great lunch with excellent service. I had a pear salad, ask me about romaine lettuce and hep a. Walt had a ham and cheese with sliced pair (Parisian pear sandwich). From there we made our way to Danville where we stopped at Kroger for snacks and supplies. Then the Liquor Barn next door. I want one of these in my town. Really. It’s just too cool. They have liquor and beer and snacks and liquor and beer and this one even had a bar in the middle. Have a beer while you pick out beer. Does it get better?

We finally made it to the Farm. Holy shit, one lane windy roads, dogs, and deer everywhere. It’s a quiet, dead end road with no traffic and very few neighbors.

After a nap and a very short hike, we decided it was dinner time. We debated on whether we should go to Danville or Springfield for dinner. We chose Springfield because it’s closer to our current location. We went to a place called Mordecai’s in downtown Springfield. On Friday they have seafood buffet with shrimp and crab legs and other seafood type stuff. But we aren’t really buffet people, so we ordered off the menu. We started with the Wisconsin cheese curds, fried cheese with a spicy breading. I got the blackened, grilled salmon and the mister got the Kentucky Hot Brown. What in the hell is that? I can hear you asking that right now. Well, it’s white bread (usually toasted), turkey, cheese, mornay sauce (this varies depending on location), more cheese, bacon, and tomato. There are variations with ham added. This version did not have the Mornay sauce which disappointed the mister greatly. He said it was still excellent. The beverage was Country Boy Cougar Bait, brewed in Georgetown, KY. I generally prefer darker beers, but I liked this pretty well. In fact, we bought a six pack to back to Tennessee with us.

The next morning, we took a much longer hike. We saw a few deer in the distance, but not much else. After cleaning up, we headed to Bardstown, KY for lunch. I loved Bardstown. It reminded me of a European town or maybe something in England. It very much had the feel of a quaint historic village. We had lunch at the Old Talbott Tavern. The historic tavern contains a bed and breakfast, a restaurant, and a bourbon bar. The food was fantastic. I had the brisket sandwich. The mister had the Kentucky Hot Brown. This hot brown had the Mornay sauce, making him a happy man. We did try the Kentucky Ale beer cheese. It was good, but I have had better. I washed mine down with Guinness and the mister had the Tavern Mule – bourbon, ginger beer, and fresh ginger. It was perfect. Did I mention they have a bourbon bar? See the pics!

View from the morning hike

The Bourbon Bar – all of those bottles are bourbon

Walt with a blackened tree

After lunch we went to the Bourbon Heritage Center, located at the Heavenhill Distillery. If you go to a distillery, note the trees in the area. All of the bark will be black. This is from where the liquid evaporates and coats everything in the area. The museum had a great exhibition, detailing the history of Kentucky bourbon. We did not tour the distillery or do a tasting. We were tired and had enough drink already.

Sunday morning, we headed home. On the way home we stopped in Stanford, so I could take some more photos of the courthouse. We finally made it to the interstate and a Waffle House. I got my old standard, the Cheese and Eggs plate and the mister got a bacon, egg, and cheese sandwich.

If you have seen my Tuesday Trekkin’ blogs, you’ll know that I love to visit small town America. Many of the small towns I visit are virtually empty. It was great to see active small towns worth visiting again. Americana at its best!